JUMP BACK TO THIS 80’S WITH THIS FANTASTIC MUSICAL PERFORMANCE! 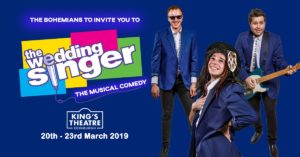 The famous Adam Sandler and Drew Barrymore flick about love in the 80’s gets the stage musical treatment courtesy of the Bohemians amateur dramatic society. But did it put a song in my heart?

The story line is quite Hollywood in the fact that it concerns a sweet girl who’s going to be marrying an obnoxious but wealthy individual, but her quirky male pal ( in this case our titular wedding singer) ends up running to the airport to confess his love to her.

Granted it’s not the most original of material, but this show like the film it’s based upon does have enough idiosyncrasies to make it memorable. You know when it about screen to stage adaptations there can be an odd habit of the main actor literally emulating the performance from their screen equivalent. And I’ll be frank, the results can at times be jarring if not just outright bad. So I’m glad that Fraser Jamieson had the gumption to make the role of Robbie Hart his own and not channel his inner Adam Sandler as it were! Himself and Katherine Croan who plays his main love interest Julia Sullivan, do sell you in their rather sweet performance together.

There are some great song and dance numbers here, be it ‘All about the Green’ or ‘Move that Thang’. And you can see that the choreography is pretty tight on these thanks to the combined might of Dominic Lewis and Felicity Thomas. In relation to the latter it’s actually quite hilarious to witness the unlikely double act of Rob’s effete band-mate George (Ross MacPherson) and Rob’s Grandmother Rosie (Cathy Gedde), as they break out the robot and other formidable moves! I tell you something Granny’s got game! And in relation to these character quirks, we truly get to see an outrageous performance from Zoe Brookes who plays Linda, the former fiance of Rob. She’s only appears a couple of times within the whole production, but she totally dominates the stage in her audaciously naughty antics! I think we have to commend Malcolm Burnett (Director) a lot for what he manages to extract from his actors, particularly the fringe cast members. Because although they may not have a lot of time upon that stage, boy do they utilise it magnificently. Probably, one of my favourite performances throughout the night was from Stuart Williamson who performs the minor role of “The Bum”. Just this guy who’s three sheets to the wind and is practically propping up the bar. The things he comes out with are just priceless and his comic timing is spot on too.

In earnest, when I first went into the show, I was alas, in a glum kind of mood but by the end of the night it certainly had me smiling! And I think that is high praise indeed.