MARKUS FINDS THAT THIS AMATEUR MUSICAL IS FAR AND ABOVE FAIR! 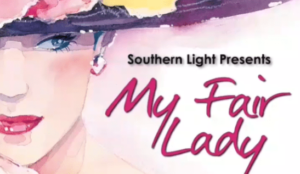 The Southern Light Opera Company are here once again to grace the King’s Stage with their very latest offering of pygmalion proportions, “My Fair Lady”. The Southern Light Opera may be an amateur production but the quality and standards that they produce are very professional and they truly have some talented people working to imbue life within this creation.

The tale in question is set in London during Edwardian times where pompous phonetic Professor Henry Higgins (John Bruce) decides to get into a wager with Colonel Pickering (Alan Hunter) about transforming the diction of flower seller Eliza Doolittle (Rebekah Lansley) and her cockneyisms so she can pass muster for a Duchess!

Lansley’s London street slang can certainly be over the top but you can truly hear her crisp singing voice emanating beyond this, so it does make for a good contrast. And she is able to elicit quite a bit of humility and sensitivity into her rather scrappy role too!

And Bruce certainly performs as the perfect foil for her. To be honest I think in lesser hands his character would have come across as too much. Higgin’s as a character can be an insufferable, boorish prig. But Bruce gets to emanate very deftly that it’s more of a way to protect himself so that he doesn’t get too attached to anyone. In general quite a few of my favourite moments were the ones of a more subtle variety. Little scenes where time is taken to say nothing, or that someone can come into a room very discreetly. Which can be a little unusual for a musical where it’s usually all razzle dazzle jazz hands!

One musical scene in particular “Poor Professor Higgins” which is very much a Greek chorus with the house servants voicing their concern, is truly delightful. Because between each verse is a little humorous vignette set in the study with Higgins, Eliza and Pickering playing off each other. To be honest there’s not a lot happening in the way of character development, it just has these people interacting, getting exasperated but equally enjoying each others company. Which comes across as very human.

And I think we have to thank producer Andy Johnston and assistant director Louise Hunter for extracting these aspects from their fine cast. And talking about the marvelous cast may I heartily commend Keith Kilgore for his roguish portrayal of Eliza’s father Alfred P. Doolittle. He’s quite the double talking vagabond and a total schemer if ever there was one, but he does imbue him with a puckish charm, particularly when he’s singing “With a Little Bit of Luck”!

And of course with all this singing and dancing we cannot forget who helped bring this to the stage. Crawford Moyes is a deft hand at rousing the best from his orchestra as musical director and Louise Williamson choreography equally channels her cast as she has them doing back flips across the stage!

All in all, a tremendous experience with fantastic sets, toe tapping music and a casts enthusiasm that was truly infectious. This show had me beaming from ear to ear.