THOSE DEBAUCHED PURVEYORS OF CIRCUS SHENANIGANS “LA CLIQUE NOEL” ARE BACK IN THE BURGH TO BRING US THEY’RE RATHER DIFFERENT TAKE ON THIS SEASON’S FESTIVITIES! 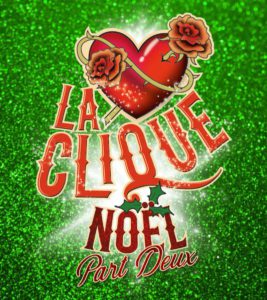 Till the 5th of January

“Doom Patrol” = A comic with a ragtag bunch of self confessed freaks who through their outlandish adventures and curious abilities bring joy and an eldritch sort of harmony to this world!

“La Clique Noel” = A circus with a ragtag bunch of self confessed freaks who through their outlandish adventures and curious abilities bring joy and an eldritch sort of harmony to this world!

But we’re not talking about ingenuity of the comic book arts here. Instead, I’m referring to the rather debauched delights that are being offered down at the Spiegeltent on Lothian Road and all served up by the outrageous and vivacious empresario Fraulein Bernie Deiter. Revel in her raucous wit and be beguiled with her mesmeric melodies.

We also have that rather cheeky master of illusion Paul Zenon, as he wows the audiences with card tricks involving what you may very well find in your Christmas stocking, if you’ve been good…

Or maybe you’d prefer the talents of the Moscow born Mosh, as she seductively unwraps herself this festive season! Bringing a wee bit of burlesque for your viewing pleasure.

Perhaps, you’d enjoy the awkward charms of Florian Brooks. Although he gives off quite a prim and proper air he is a highly accomplished juggler with the poise and flexibility of Doug Jones.

It’s possible that Stephen Williams may be more your meat and drink, as he twirls and twists through the air with the greatest of ease and although one of his performances is technically wet, it is very far from being a damp squib!

But in contrast if you’re feeling the chill on this winter night. Why not pull your seat a little closer to their resident roaring fire breather Heather Halliday! And believe me billowing flames is not the only skill in this mischievous minx’s repertoire…

So what on earth are you waiting for! Get thee hence to the Spiegeltent. What else can I say apart from they’re my heroes!