THE CLASSIC 80’S MOVIE GETS A WHOLE NEW LEASE ON LIFE AS IT’S ADAPTED FOR THE STAGE IN THIS WELL CONSIDERED PRODUCTION! 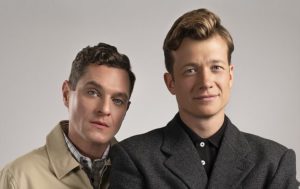 The much lauded 80’s film starring Tom Cruise and Dustin Hoffman that addresses aspergers has been adapted for the stage in this fine show by Dan Gordon.

The tale in question regards two brothers who are brought together through their father’s death. The younger of the two Charlie Babbitt (Ed Speleers), never saw eye to eye with his father and left home to fend for himself in the world at an early age. He now realises his father had millions and that this inheritance is being passed over to a brother he doesn’t even remember; called Raymond (Mathew Horne). The latter has spent almost the past thirty years in an institute and although not gifted socially, he is a savant when it comes to memory, particularly with numbers. It’s an interesting story this one and I remember it was one of the first films I saw in my teens that wasn’t of the animated, adventurous or comedic ilk that I’d usually spend time watching. It was the kind of movie that’s meant to pull on your heart strings but it actually does this very well. And the same can be said of this well made stage production too.

I have made a few comparisons to the film already, but in ways the play relies quite a bit on this in one particular area, which makes it hard to see it completely as its own entity. What I’m referring to here is the performance given by Speleers. As soon as the curtain is raised we can very much see that Speleers is channeling his inner Tom Cruise! Be it in the way he speaks or how he even moves. It’s certainly distracting and a little bit of a shame that director Jonathan O’ Boyle didn’t put a stop to this altogether. Horne gives a very nuanced performance and truly makes it his own, adding distinct idiosyncrasies to his role. But saying that Speleers ups his game when he shares some of the quieter moments with Horne. As these two brothers bond their performance is really quite sweet and you can’t help but care for these characters. Which is interesting as the role of Charlie is certainly initially painted as a rather unlikable one. As he seems up for taking advantage of his brother and is certainly verbally abusing Raymond and flinging the word “retard” around willy-nilly to begin with.

Society and culture have certainly become more aware and sensitive of mental illness since the 1980’s. And in ways I was wondering if Charlie’s behaviour should have been amended. But in earnest I’m glad this didn’t happen. As it kind of holds a mirror up to our past, that this behaviour was something of it’s time. And remind us that although we’ve come some distance with bringing awareness to mental health, we still have a journey to go.