The origins of whisky

One of the first things that come to mind when you think of Scotland is probably whisky. The name stems from the Gaelic term uisge beatha, which means ‘water of life’. Similarly, the Scandinavian spirit Akvavit stems from the Latin term for ‘water of life’, aqua vitae. The first winery was founded in ancient Armenia as early as 4100 BC, meanwhile whisky distillation is believed to have started somewhere between the 11th and 12th century. Historians believe whisky was brought to Scotland and Ireland by Christian monks, although the specific origins are unclear. But how did whisky become a staple of Scotland, Ireland and even the US? Well, as these countries had a lower supply of grapes, distilling spirits from grains like wheat and barley was more efficient. Today, there are over 126 whisky distilleries in Scotland producing the delicious water of life.

The many terms for whisky is confusing for beginners and connoisseurs alike. Whisky falls under a few categories, and the distinctions are fairly simple. Irish whiskey must be made in Ireland, containing less than 94.8% alcohol and aged for at least three years. Bourbon whisky must be made from at least 51% corn, with less than 80% alcohol and by law it must be produced in the US. Since bourbon is made from corn, it’s a bit sweeter than most Scotch and Irish whisky. Scotch whisky  must be produced in Scotland, and is made from water, caramel and malted barley, distilled to 40-94.8% alcohol and is aged for at least three years.

There are three overarching types of Scotch: 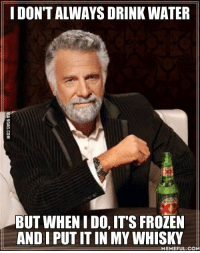 How to order whisky in Scotland

When you ask for whisky in a Scottish bar, the first question they ask you will be: “What type of whisky do you want?”. While no one expects you to know all the regions, here’s a helpful guide to finding the type of whisky you like. In general, you can think of whisky on a scale from sweet to peaty/smoky. Beginners are better off starting with sweet/non-peaty whiskies. When talking about Scotch whisky, we categorise the types across the 6 whisky-producing regions of Scotland.

The 6 whisky-producing regions of Scotland

Lowlands whisky originates in the south of Scotland, including cities like Glasgow and Edinburgh. Lowlands whisky, like Auchentoschan, are usually low in peatiness. If you’re looking for toffee, cinnamon and creamy undertones, this is a good place to start.

Speyside whisky comes from the north east of Scotland, around the river Spey. It is home to 60 distilleries, the highest number in the nation, including Balvenie and Glenfiddich. Speyside whiskies are famous for their sweetness, containing little to no peat. You can expect flavours like vanilla, fruit and nutmeg. If you only try one whisky in your life, go for Balvenie 14 Carribbean Cask which is partially aged in rum casks, giving it a smooth, sweet finish.

Highlands whisky is probably the most diverse in range of flavour, as it is the largest whisky-producing region. Some famous distilleries include Dalmore and Glenmorangie. The flavours can be anything from fruit cake to heather or smoke.

Campbeltown is a small but mighty region. There are only three distilleries: the smoky Springbank, the grassy Glen Scotia and the salty Glengyle’s.

Islay is the smallest whisky region in terms of area, but has more distilleries than Campbeltown. Islay whiskies, such as Laphroig and Lagavulin truly bring the peat. However, their unpeated whiskies like Caol Ila (pronounced cull-eela) and Bruichladdich (brook-laddy is close enough) are perfect if you want something a bit sweeter.

Islands (or Isles) whisky is distilled on the islands of Scotland, such as Jura, Talisker and Highland Park. Technically, Islands whisky is part of the Highlands region. However, the unique Islands flavour more than earns them the right to be a region of their own. If you think of whisky as weather, Islands whisky is definitely a storm. Think salt water, smoky clouds, peppery rocks with a touch of caramel sweetness. Usually, you can spot an Islands whisky by its darker colour.

Where and how to drink whisky

Most of the Scottish distilleries offer guided tours where you can taste their different whiskies. If you find yourself in Edinburgh, don’t be afraid to go into specialised whisky bars like Bow Bar and Whiski Rooms. The bartenders are more than happy to take you on your whisky journey. If you’re keen to learn more, The Scotch Whisky Experience also provides a top-notch crash course. Realistically, you can find whisky in pretty much every single bar in Scotland, so you don’t have to look very far.

Whisky snobs will scoff if you choose to mix it with coke, but the truth is you can drink whisky however you please. If you want to sound like a hardcore whisky drinker, order your dram neat (without ice). In my opinion, there’s nothing wrong with asking for a small jug of water to dilute the whisky – this also lengthens your experience. Alternatively, you can ask for your whisky on the rocks. However you choose to drink it, the most important thing is that you enjoy it. The first sip always burns a little bit, but don’t worry, this is part of the process. The fastest way to ‘prepare your palette’ is to tilt your head back a little bit to let the whisky travel across your tongue. After this first sip, you can add a touch of water to dilute the flavour, and just enjoy yourself.