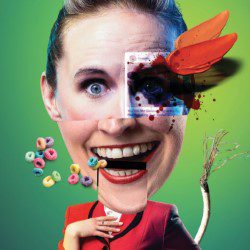 MARKUS SEES WHAT COULD BE ONE OF THE MOST INNOVATIVE PIECES OF THEATRE AT THE FRINGE!

The world we live in is highly influenced by what we see on our screens. Be it what we gorge ourselves on over the internet or it’s spawn; social media. But we can also play a part in this too, be it creating articles or media pieces and chasing up hits almost by any means possible. Which can then leads into the whole fake news debacle that we do hear so much of these days.

And this intriguing play from Theatre Temoin reveals to us these dark and manipulative aspects that control our latest dose of whatever’s making news headlines at this particular fleeting moment.  In this instance it’s the photo of a dead Palestinian boy, and how a journalist has used it without the photographer in question even knowing about it.

Initially, the way the show was playing I thought it was a little preachy and although there is an interesting idea here, I felt it might be one that’s trying too hard to be “serious” and almost giving us a thought for the day. Which is not uncommon in theatre and certainly always pretty prevalent at the Fringe. But to be honest, what we get here is something, so much more than that. If anything the set up here leads to something much more thought provoking and subversive that’s served with a side of deliciously dark humour!

In a matter of fact, the play is completely aware of the po-faced nature I first mentioned and also pokes fun at one character because of what could be seen as rather holier than thou behaviour. Meta-textual qualities are abound in this production, and it has no trouble in even sending up or reinterpreting some scenes that happened moments earlier in the play. As if the contents of the play itself is being influenced by the internet itself, complete with hashtags and click-bait.

Do yourself a favour and check out this curious beast, as Theatre Temoin have certainly shown me not just one of the most interesting, beguiling and bizarre plays I’ve seen at the Fringe but it may actually be one of the best plays that I have ever seen in my life!