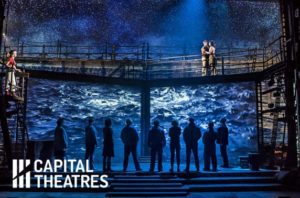 When this show began, I was rather intrigued by it closeness; as it gave the air of a bit of a folk session which I’ve never seen done on as large a stage as this before as characters came out and played on instruments and sang the odd tune while engaging with the audience as well. I quite liked this quality as it kind of helped to give a rather rustic but familiar setting. This was equally helped with the impressive standing set created by 59 Productions. These girders and ladders very much gave the feeling of being down at the dock yards where most of this show is set. It’s also ably helped by 59’s impressive visual projections. Some times from out of the girders a couple of screens will fall down in order to better represent a smaller scene, be it in a pub or a living room.

But for all the warmth and enthusiasm, the storyline is not the most striking. This musical created by Sting concerns dock workers sticking it against the man in Liverpool.  It also involves a love affair between Gideon Fletcher (Richard Fleeshman) and Meg Dawson (Frances McNamee). Gideon has left this type of life and his sweetheart behind as he runs away to sea for a few years… 17 years! Although they try to make Gideon somewhat upstanding and affable,  it is kind of hard to get behind him as he comes across as something of a capricious individual. His main reason for leaving is to escape this life on the docks, but he leaves his invalid father behind and doesn’t even come back for his old man’s funeral! And alas it’s never truly made satisfyingly clear as to why that is.

The production is also not helped with some rather over the top clichés, be it the intellectual who’s forever quoting the ancient Greeks or the jack the lad who is permanently drunk. But probably the worst offender is Susan Fay who is alas lumbered with the role of Baroness Tynedale, who is as obvious a parody of old iron lady herself, Margaret Thatcher as you could ever have. I’ll admit there seems to be quite a bit of these rather lazy political send ups happening these days, and to be honest I’ve rather had my fill of them. And in this purpose it didn’t really add anything to the scene. 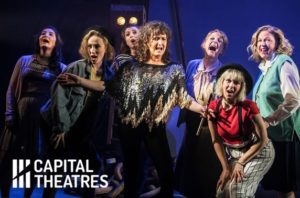 At least we have Joe McGann bringing a dignified approach to his salt of the earth role of foreman Jackie White. And he creates a decent double act with Penelope Woodman who plays his wife Peggy. Actually one of my favourite scenes is a quiet moment that they share in a church together. But again their characters are kind of lumbered with some over the top moments towards the end, that don’t sit well.

You might think for all my grousing that I didn’t enjoy the evening, but you’d actually be quite wrong. Overall, if you look past the stuff I mentioned and the rather abrupt ending, it does make for a rather entertaining piece. Flawed? Yes. But it certainly made up for with the enthusiasm of the actors and the truly magnificent atmospherics created by 59.