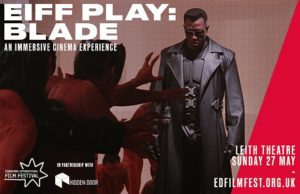 MARKUS GETS GIVEN THE SCREAMING HEEBIE JEEBIES AT THIS DARK PRECURSOR TO THE EDINBURGH FILM FESTIVAL!

The Hidden Door Festival venue that is the Leith Theatre paid homage to the godfather of underdog superheroics on the silver screen: We’re talking about the Daywalker, ergo Wesley Snipes portrayal of demi- vampiric bloodsucker hunter Blade! Without the moxy of Blade it’s probably very true that we would never have seen the likes of Ant-man or the Guardians of the Galaxy play out upon our cinema screens. Even the hero of Ironman, who is now a household name wouldn’t even have registered back in the days of the late 90’s.

But in ways this classic film of the 1990’s was actually a rather safe venture from the studios of New Line Cinema.  A mere test to dabble in Marvel’s superheroic backyard without the heavy weight the likes of Spiderman or even the Hulk might bring. The film certainly takes its own spin on this recurring character from ‘The Tomb of Dracula” comics; as if taking just the blood of the character and building the body of the film around it, that it becomes a much more virulent beast. But that is very much the appeal of the movie, and something that the EIFF have truly embraced in bringing this immersive experience before us.

As I walked into the old theatre and was corralled into a rather dark corridor, there was already an intensity put in place by the master actors of Scare Scotland and the subtle but affecting design of Mark Adams (Artistic Director). Be it the projection of the beastly flesh hanging off the abattoir hooks in the background or the intense way the vampiric bouncer was asking if you were “A human or a familiar” as you were being scanned into the club itself. And said venue screamed all the Euro-trash vibes that would give any new age vampire a run for its money. Be it the urban – gothic podium dancers, the vials of substance  upon the bar counter or even the nosferatu hieroglyphics that were embedded here and there and led me on a rather merry but macabre path.

I do have a highly overactive imagination, so whenever I discover anything that’s new and interactive, believe me the first time round I can get very lost in it, even if it’s a board game! And here was no exception, as I was very much wandering and exploring around before I even grasped that I was supposed to be completing a quest before the film! There was one stage, where I ended up being let into a high up, secret room in this adventure without even realising it, by merely being inquisitive and a bit cheeky towards the vampire guard. I think he admired my pluck! The actors of Scare Scotland were marvellous and have truly got what it takes to be scary. I’ve experienced plenty of spooky stuff in my time, but I often find people are too over the top. Where the true nature to horror, is less is more, which these stalwarts truly represented as they made me feel unsettled and on edge the whole two hours before the film began. And I couldn’t have asked for anything less.

As I settled into my seat in this abandoned theatre to appreciate the film, subtle aspects were added here to further embrace you with the movie, be it through lighting, other atmospherics or even the acting. There was so much effort put into this, it’s a shame it only happened for one night. But I tell you, it won’t be something I gnash my eye teeth over.