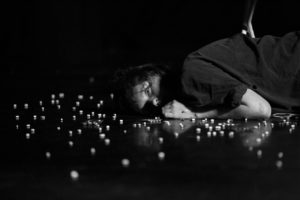 AN INTENSE NIGHT OF DANCE WITH A STRONG MESSAGE AT THE ROXY!

As I was settling into my seat the other night at the Roxy, I found it curious that the young lady sitting beside me decided to take of her boots. I thought to myself that maybe she had a long day and that she was making herself comfortable whilst she watched this evening’s performance. But as she started to take her socks off, I was even more surprised especially when she picked them all up and quietly excused herself past other audience members, until she made her way onto the very stage itself!

This is an interesting introduction, as the nature of JJG Dance’s contemporary dance show I was about to attend was on bringing more awareness to mental health through this medium, as part of the Scottish Mental Health Arts Festival 2018. The very fact of how this introduction was done in having more direct contact with the audience to show that with this faceless malaise of mental illness it could be any one of suffering and you wouldn’t know it.

The show was probably like nothing else I ever encountered before. At its core it had a raw brutality, which is very important in delivering a message through dance but “The Box” doesn’t deal with that form exclusively. Which alas I think loses a bit of its power.

Of the four dancers, I do feel Amelia McCarthy was truly the stalwart of the gambol. She had a tremendous strength but vulnerability to her. There were times when she would contort her body into almost a box like shape and she would hold that pose for an extended period of time which was uncomfortable to look at but you could literally hear the discomfort McCarthy was in as you heard her limbs cracking under the strain.

Another scene has her desperately trying to break free from the other dancers as they are forcibly holding her back. There’s a severe quality to this and to her fight for freedom, as she pulls against the others you could tell that the dancers weren’t really playing here. I felt this scene so much that I actually became aware that my breathing was in sync with McCarthy!

Julia James-Griffiths (Director / Choreographer) has peppered her dance production with a series of spoken comic vignettes. Although I admit they are amusing and informative, (in a dark sort of way) I do feel they take away from this talented ensemble’s performances. And I think it would have been a braver and more fluid form of art had these aspects been curtailed.

Still although a bit distracting it doesn’t take away from the powerful message of this production and I’ll be keeping my eye open for future performances from this very talented troupe.