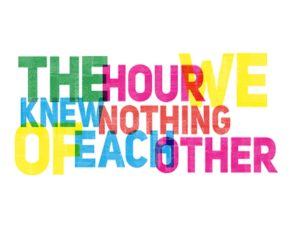 GERGELY IS TOTALLY IMPRESSED BY THIS PERFORMANCE THAT SHOWS ALL THE SQUARE IS A STAGE!

I walked into The Lyceum tonight with the promise of a highly entertaining amateur night. The idea of seeing close to a hundred people plus a dog perform at the same time was already exciting, but the show I saw far exceeded my expectations. The Hour We Knew Nothing of Each Other, under the hands of directors Wils Wilson and Janice Parker, becomes a charming and absolutely enchanting performance with a unique down to earth magic about it, that’s sure to leave a permanent mark.

The dialogueless show is kicked off, and is in fact set in all its entirety, on a quite busy square, with people walking, skipping, dancing, running, strolling their own way, sometimes interacting with, other times not caring much about each other. We have the chance to peek into the lives of a myriad of individuals, seeing only a few seconds of their stories while they pass by our window. From the second the curtain goes up we see the people of the square, and there is only little time during the play when there’s not much happening on it at all. Even these silences, and seemingly idle seconds are so well timed, we feel as if the square itself was alive with the slowly changing lights cutting through the ever swirling smoke. And I think this sense of the square being alive is the key to the magic of the show. 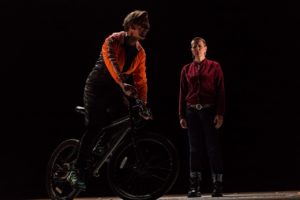 Thanks to the ingenious music of Michael John McCarthy, we have a physical sense of time throughout the play, and we feel like we’re watching a well-choreographed dance. Everything, from clumsy street sweeping through drunk stumbling to just staying in one place, looking around for directions, becomes a dance move. In the first minutes watching all the movement on stage to the creative sound of percussion is entertaining in itself, but after a while our mind begins to wander. We start to look for something to hold onto in this building chaos, we wait for a young girl to emerge from the crowd so that we can follow her story or an old man to suddenly burst into a monologue. We start to look for symbolism in the recurring characters, the direction they are walking in, anything! But we won’t find anything of the sort in this show. Eventually the realization that this anchor point has been with us since the very beginning, hits! And we start to understand we are watching the story of the only thing that hasn’t physically changed; the story of the square itself. The set design of Fly Davis, with the marvelous lighting by Kai Fischer, perfectly complements this concept. The appearance of the stage is rather simple, leaving a lot of room for the portrayal of its personality, which is slowly gained through the enthusiastic and heartfelt performance of a Community Chorus of Edinburgh Residents.

The duality of the audience seeing and noticing everything that’s happening and associating it with the square and the actors just passing through it in the space of a few minutes completely oblivious to what has happened before creates a powerful contrast and leads to some especially strong episodes. The moment when I realized what the over-the-clouds happy lady shuffling through the stage did not, that a presumably dead body lay on the ground right under her joyful steps only a few seconds before, was overwhelming. The feeling fortunately quickly passed by as the continuity of the episodes never left the audience stuck in one emotion. 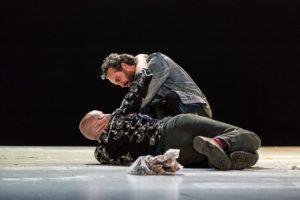 In conventional storytelling we see characters as threads of time, and we follow them as they go through ties and knots, and we feel excitement for their development. In this show however we follow a multitude of these threads as they weave into the fabric that would have its unique texture and pattern and would represent the character development of the square. Even though probably the stage has already been swept and mopped in an attempt to remove the physical marks left by the actors, the space it represented and the square it transformed into have imprinted themselves into my brain and are not going to be cleaned out for a long time.